What is Breve Coffee and How Do You Make It?

Contents show
What is a Breve Coffee?
Breve vs Latte
WHAT YOU NEED
How to Make a Breve Coffee
Step 1: Prepare a double espresso
Step 2: Steam the half-and-half
Step 3: Assemble your drink
The Verdict
FAQs
What is a mocha?
What is a café au lait?
Is a coffee breve unhealthy?

Have you ever heard of a breve coffee? We’d forgive you if you hadn’t; it’s not exactly a traditional Italian espresso-based drink. But if the idea of a latte made even richer and creamier strikes your fancy, then this article is well worth a read.

Keep going as we explore this new school American espresso drink. It’s a beverage that can double as dessert.

What is a Breve Coffee?

Confusingly, a breve coffee can also be known as a cafe breve, caffe breve, coffee breve, or breve latte.

In all cases, breve is a latte made with half-and-half instead of milk.

It’s richer, creamier, and sweeter than a traditional latte, which is why it is usually served for dessert rather than breakfast.

Though it has an Italian name, the caffè breve is much more common in America than in Italy. And that’s perhaps no surprise given the American penchant for Starbucks-style dessert-like drinks. It certainly isn’t part of the Italian tradition (1).

The word breve means “short” in Italian. Yet, it’s not entirely clear where the name arose. Most experts suggest that it’s because the fattier half-and-half doesn’t aerate as well as milk, so when you froth it, you don’t get the same volume of the drink (2).

How to Make a Breve Coffee

Okay, have you got your materials together? Great. Let’s do this! You’re only three simple steps away from a rich and delicious caffè breve at home.

The best way to make a double shot of espresso is to use an espresso maker or a latte machine. Of the two, a latte machine is the better choice as it will also allow you to froth milk.

That said, if you don’t have access to an espresso machine, this coffee drink is pretty forgiving in that any 2-ounce brew of very strong coffee will be a worthy alternative. You need espresso’s rich and strong flavor, but the creamy mouthfeel and heavy body that characterize an authentic espresso are less crucial. In this case, the half-and-half adds more than enough richness to the drink.

Pro Tip: As with any espresso-based drink, preheating your mug is a great tip to ensure your drink is at the right temperature. Pour a little boiling water into your mug and let it warm while you prepare the ground coffee.

The best way to achieve properly steamed milk or half-and-half is to use a steam wand (3). Unlike milk frothers, these inject dry steam into your cold milk and are thus able to produce the silky smooth milk texture you expect in a latte. According to Breville barista Jessica Kelly, you can expect an even richer version in a breve.

The reason why this drink is so great is because the half and half is not as heavy as whipping cream or heavy cream, but it is a little bit more substantial than whole milk.

However, if your espresso maker doesn’t have a wand, a milk frother is a worthy substitute. Not sure how to properly froth milk? Check out our guide to using a frother. It teaches you how to use any of the three main types of milk frother: manual, wand, and electric.

Putting together a breve latte is very much like how to make any latte. Using a spoon to hold back the foamed milk in your frothing pitcher, pour the steamed cream over the espresso in your latte glass until you have about twice as much cream as espresso. Then use the spoon to dollop a layer of milk foam on top. That’s all there is to it. Now just enjoy your creamy concoction!

Pro Tip: A breve latte is usually served unsweetened because steamed half-and-half naturally tastes much sweeter than steamed milk. So even if you usually add syrup to your latte, consider trying your latte breve without.

If you want to try a rich new espresso drink but aren’t quite ready to go full affogato, then go ahead and try a coffee breve at home. Whether you want an indulgent addition to your breakfast or a creamy liquid dessert, this latte variation will definitely fit the bill!

Or if you want a frothy espresso, why not try making a Freddo espresso next time.

A mocha, also called a mocha latte, is a variation of a latte in which chocolate syrup is added to the hot espresso. So it’s espresso, chocolate syrup, frothed milk, and a topping of foam. Often the top is also dusted with cocoa powder or chocolate shavings. It’s like hot chocolate, but better!

A cafe au lait is a traditional French drink consisting of one part of brewed coffee and steamed milk. Unlike a mocha or a cafe breve, it doesn’t require espresso, so it’s easy to make at home. In New Orleans, a popular regional variation of the cafe au lait uses chicory coffee and scalded milk.

A coffee breve isn’t unhealthy, but it does have a very high-fat content compared to more traditional espresso drinks, which means it also has a high-calorie count. It can certainly be part of a balanced diet, but you might not want to make it your daily morning beverage if you’re watching your weight or cholesterol. 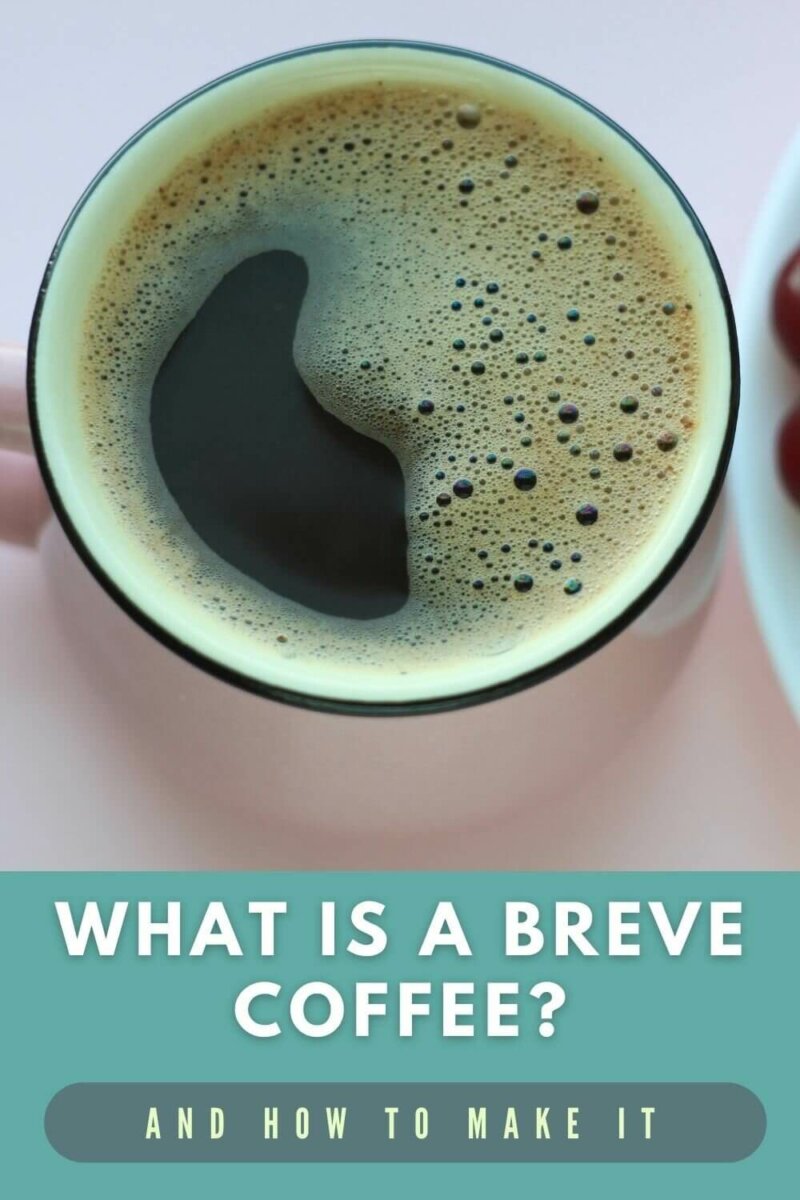 Alex Mastin
My world consists of coffee, travel, water sports and dogs...sometimes all at the same time! I spent years traveling and working in various coffee establishments, and it was on my travels that my love affair with coffee began. I've been involved in every part of the coffee production process from farm to cup and love nothing more than sharing my knowledge of my favorite morning brew with the world.
JUMP TO:
What is a Breve Coffee?
WHAT YOU NEED
How to Make a Breve Coffee
The Verdict
FAQs