A Guide to the 7 Hawaiian Coffee Growing Regions

Contents show
hawaiian coffee regions
The Big Island aka Hawai’i Island
The bottom line
FAQs
How is Kona coffee graded?
What is the best climate for growing coffee?
Why are Hawaiian coffees grown at low elevation?

If you’re searching for the next big thing in coffee, consider giving Hawaii a closer look. There’s more to it than just Kona coffee, with the other coffee growing regions of Hawaii producing exciting new coffees. This guide is here to keep you ahead of the curve.

While Kona coffee remains the most famous Hawaiian coffee export in history, some new coffee growing regions have emerged. This is due to agricultural priorities shifting from sugar to coffee.

Now, with […] thousands of acres of prime farmland released by the sugar industry, smaller coffee farmers, boutique roasters and purer coffee are getting more play.

The shift resulted in some exciting new coffees (1). You can learn more about Hawaii’s coffee industry right here.

The Big Island aka Hawai’i Island

Let’s start with the most known coffee growing region of Hawaii.

Though Hawaii is responsible for only 0.04% of the world’s coffee supply, Kona coffee is recognized worldwide. A great testament to its quality and marketing.

It gets its name from the Kona region where it’s grown, which occupies much of the western half of the Big Island. The coffee farms are clustered along the western slopes of the Mauna Loa and Hualalai volcanoes at an elevation from 500’ to 3,000’. There are 900 coffee farms in a strip of land about 30 miles long and 2 miles wide, known as the Kona coffee belt.

Ka’u was once a prominent sugar-producing region but turned to coffee upon the sugar market collapse. It lies to the southeast of Kona, on the southern slopes of Mauna Loa. Most coffee farms are small, less than 5 acres in size, and located between 1,000’ and 2,500’.

Hamakua is a small coffee growing region on the Big Island’s northeast coast with about 150 acres of coffee cultivation. Like Ka’u, it has recently shifted from sugar to coffee production.

Most of the farms are small, family-run affairs where they pick the beans by hand.

The farms lie between 350’ and 2,000’ on the northern slopes of Mauna Loa. They’re blessed with some of the most fertile soil of the whole island.

Puna is the Big Island’s newest emerging coffee-growing region of Hawaii, with plenty of untapped potential. There are 125 acres of land under cultivation, all lying between 1,000’ and 2,500 elevations.

Puna is the wettest region on the island, with a relatively cold and cloudy climate. Most of the coffee here is grown in lava, which gives it a characteristic acidity, aroma, and body.

The island of Maui has about 600 acres of coffee crops and produces a more diverse crop. The reason behind this is that this coffee growing region of Hawaii has mountainous terrain and array of micro-climates. Farmers here are more experimental when it comes to bean varieties and processing techniques – thus, helping the local coffee industry grow.

Maui’s most famous varietal is the Maui Mokka. This heirloom crop achieved worldwide recognition in 2012 when, over thousands of other coffees, Starbucks featured it in their Special Reserve coffee line (2).

Kauai was home to Hawaii’s first commercial coffee growing operation, long before Kona stole the spotlight, and is still home to its single largest coffee farm. Notably, it’s the only coffee region of Hawaii that is still unscathed by the coffee borer beetle.

This coffee growing region of Hawaii benefits from a stable year-round climate, with plenty of sunshine and mild nights. Most Hawaii coffee is grown on the lower slopes of Mount Waialeale, which receives abundant rainfall. The run-off carries the nutrients from the mountain soil to the farms, fertilizing the coffee trees below.

Molokai’s coffee production consists of a single large plantation growing the red catuai arabica varietal. It occupies 150 acres in the Kualapu’u region of the island, which like the rest of Hawaii, offers fertile volcanic soil and a stable climate.

Hawaiian coffee producers have more to offer the world than just Kona beans. Check out some of the lesser-known Hawaii coffee regions, and you might discover the next big thing.

Kona coffees are graded before export. How they are rated depends on the shape, size, color, moisture content, and defects.

The best climate for growing coffee is warm but not too hot, with fertile soils and limited pests or diseases.

Hawaiian coffees are grown at low elevation because Hawaii is so far north of the equator. Higher elevations are too cold. 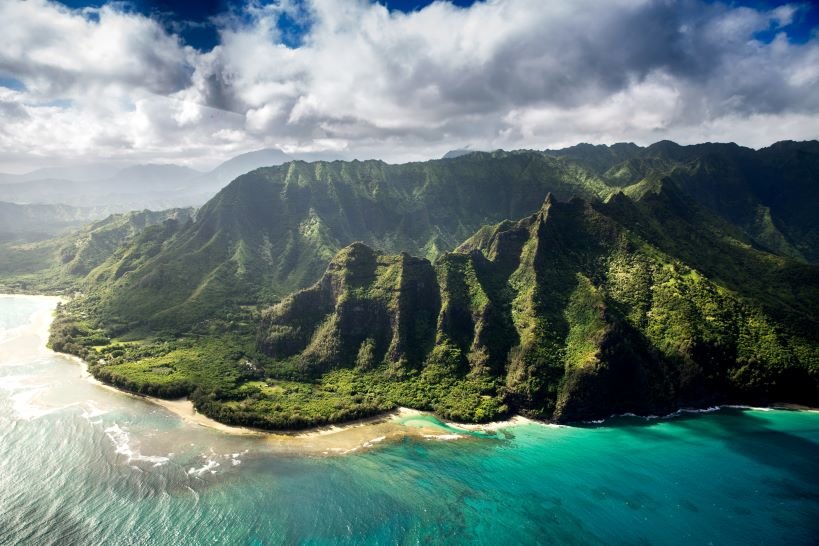 Julia Bobak
I love trail running, rock climbing, coffee, food, and my tiny dog — and writing about all of them. I start every morning with a fresh Americano from my home espresso machine, or I don’t start it at all.
JUMP TO:
hawaiian coffee regions
The bottom line
FAQs