Does Cold Brew Have More Caffeine Than Regular Hot Coffee?

Ah, caffeine. This beloved chemical makes our morning coffee so much more than a flavorful way to begin the day.

Cold brew is notorious for being filled with caffeine. It is marketed as the go-to coffee choice when you need an extra jolt. But, does it contain more caffeine?

Keep reading to find out.

How Much Caffeine Is In Cold Brew?

The caffeine content of cold brew varies greatly. You can buy this coffee in a ready-to-drink state at a supermarket, from a coffee shop, or make cold brew coffee concentrate yourself. Each option can have widely different amounts of caffeine.

From Starbucks, a tall cup of cold brew has 155mg of caffeine. In comparison, a similar drink at Dunkin Donuts has 174mg per serving (2).

400mg is regarded as a safe intake of caffeine per day, so most of these beverages are within a healthy range (3).

Why does It have more caffeine?

Cold brew has a lot of benefits including a higher caffeine content. Homemade versions initially have much more caffeine due to the coffee to water ratio. An initial batch uses two to three times more coffee than a hot brew method that yields the same liquid amount.

A coldbrew concentrate can have over 500mg of caffeine per 8oz of liquid, while a hot brew of equal volume usually has about 100mg. However, the resulting mixture is not a ready-to-drink beverage like the hot brew method.

Well, Is It Stronger?

Surprisingly, if ratios of beans to water are equal, caffeine is higher in hot brew coffee. This is due to the effect hot water has on caffeine in the beans.

Caffeine’s solubility is primarily driven by temperature, such that at higher temperatures, significantly more caffeine will dissolve in solution than at cooler temperatures.

Quite differently to this process, cold brew has more caffeine because the brewing process uses more coffee. More coffee means the brew has more potential to become extremely potent. If hot brewing used as many beans as most cold brewing methods, the resulting beverage would have much more caffeine.

Coffee to water ratio is the biggest factor in caffeine levels of cold brew.

Many ready-to-drink cold brew have more caffeine than their chilled coffee counterparts because manufacturers use more coffee in the production process. However, if you make your own batch of this drink, you can control the amount of caffeine. Simply use less concentrate in your morning cup if you want to lower your caffeine intake. Alternatively, you can increase the amount of concentrate if you want more caffeine.

P.S. Want to brew a great tasting batch of this drink? Here are some cool tips!

Not all coldbrew coffee has more caffeine than your regular hot coffee. If beans and water are equal, hot brewed coffee will have more caffeine. However, this brew method usually uses more beans than a hot brew, so it isn’t easy to compare.

Cold brew does not necessarily have more caffeine than espresso. On average, 50ml of cold brew has about 85mg of caffeine, equivalent to 30ml of espresso. It might seem like cold brew contains more caffeine because of the way it’s prepared and consumed. But simple mathematics tells us it does not.

Many people consume cold brew faster. Cold brew is a refreshing coffee drink, so people tend to drink it differently to regular coffee. The jitters can come from the rate of caffeine consumption and not necessarily the amount. However, people on coffee forums say they’re more likely to get jitters from regular coffee than cold brew. So this is also a subjective matter. 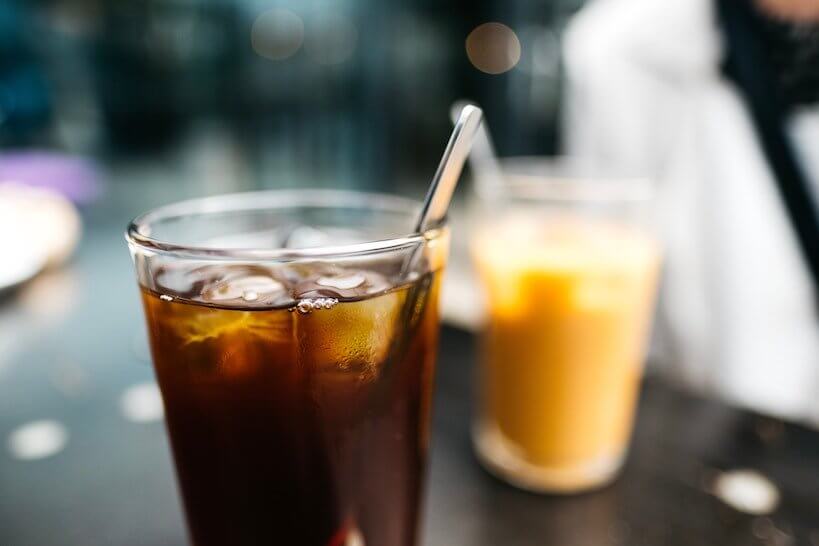 Jovana D
I come from a country where people drink domestic coffee (what the rest of the world knows as Turkish coffee) and where Nescafe designates all instant coffees ever made. So, imagine my first encounter with, say, Hario V60...Yes, it was love at first sight.  Today I’m a moderate coffee connoisseur and a huge coffee lover. My favorite brewing methods are the V60 and traditional espresso-making. Yet, despite my country’s long tradition of Turkish-coffee-adoring, I somehow cannot stand it. That’s just too dark, even for me.
JUMP TO:
How Much Caffeine Is In Cold Brew?
Why does It have more caffeine?
Well, Is It Stronger?
Final Thoughts
FAQs