Home » AeroPress vs French Press (The Difference is Clear)

The French press has long been a staple in coffee shops and kitchens around the world, but the AeroPress is a new age, dark horse way of brewing coffee which is leveling the playing field.

If you’re considering purchasing either of these press coffee makers, it may be worth checking out how they compare before taking one home.

I’ve put together a quick overview of the French press vs. the Aeropress to help you decide which may be the better brewing device for you. 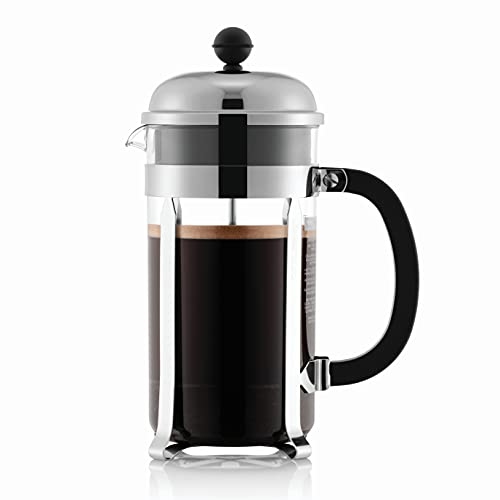 The French Press – also called a press pot, coffee press, or cafetière if you’re listening to Edith Piaf at a cafe on the Left Bank (or just wishing you were) – is a tried and true brew method. If you’re new to the coffee brewing world, then you might as well learn what a French Press coffee maker is used for and how it works.

This brewer has withstood the test of time and is still a favorite among coffee lovers. When made right, you end up with a rich-textured, robust cup of coffee that many coffee drinkers say is beyond compare.

The process of using a French press is one that’s precisely timed, measured, and heated, but I’ll just go through the basics:

One simple way to check your grind size: note how difficult it is to press the plunger. If the grounds are too coarse, the plunger will glide effortlessly; too fine and it will be very hard to press down.

If you are in the market for a french press, consider one of these models. If you already have one – you should check out these specific brewing instructions on how to use a French press. 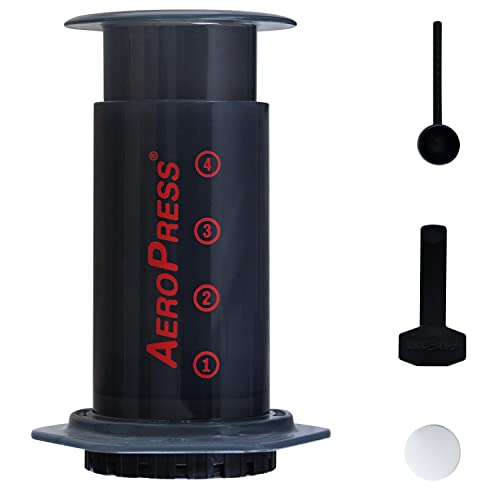 The Aeropress is a newcomer to the coffee game, with fewer chambers to worry about. Although it uses plastic components, they are BPA-free and use no phthalates, so you don’t have to worry about off aromas or lingering chemicals.

It makes espresso as well as brew coffee (well, this is for you to decide; it doesn’t quite equal the results from an espresso machine) but I would say rather that it makes a super strong coffee that can be used in the same manner as espresso before dilution.

And that’s just one way to make coffee with an AeroPress – there are plenty of ways to skin a cat with this handy little contraption. This has become so popular, the Aeropress now has its own competition dedicated to it (1)!

The AeroPress leaves you with a non-bitter, low-acidity cup of coffee, and like the French press is somewhat customizable in regards to temperature and time.

The Showdown: AeroPress vs French Press

Now that you’ve refreshed your knowledge of each product, let’s pair them head to head to reveal, clearly, which one is right for you. These are 2 very popular coffee makers, and I’ve chosen to look at ease of use, brew time, and the final product, because what else matters?

Using a French press may require a little practice and adjustment to achieve the perfect cup, but once learned the process isn’t difficult or terribly involved. And it’s not just making coffee that’s easy with your French press: cleaning is a breeze – just rinse out the grinds from the glass carafe and mesh filter at your leisure.

Think of it this way: in a power outage, armed with a hand grinder, a wood stove to boil water on and a French press, you could still make coffee. The same can not be said for coffee capsules. (2)

At the risk of sounding like a broken record – using and cleaning the AeroPress isn’t difficult either. It comes with a pre-measured scoop, and markings on the chamber to show you how much water to add. The process involves a few more steps than a French press, but once you get it down it requires less attention to detail, and there are plenty of variations for achieving the best flavor for you.

The Aeropress has a feature that ejects the used coffee grounds and the filter, which is pretty nifty, but it still requires a good rinse. It uses paper filters, but they aren’t expensive and eject along with the rest of the grounds.

WINNER: While both are easy processes, the Aeropress has less room for error and the eject feature makes clean-up super easy (and it feels great – just wait until you try it).

From start to finish, brewing time for French press coffee is about five minutes, sometimes more. The grounds must be left to bloom for about 30 seconds with just enough hot water to cover them, which releases the coffee oils and aromas that are part of the French press experience. After that, it’s on with the filter cap for another four minutes of steeping with more water.

If you enjoy the actual process of coffee brewing and enjoy getting hands-on, this method might be one you’d prefer. Most French presses come in an eight-cup capacity so a single brew can serve about four mugs.

The Aeropress boasts a much shorter brew time, clocking in at about a minute and a half. The grounds don’t need to steep, you merely stir them for ten seconds, then push the top of the Aeropress down slowly on the main chamber.

Alan’s [Adler] new method shortened the typical wet time of other makers from 4-5 minutes to one minute. (3)

The AeroPress can be used to make more than a single cup if you use two or three times the grounds for the brewing process and then add eight to twelve cups of hot water.

WINNER: The Aeropress wins by a mile here thanks to its incredibly short brew time. A minute and a half for up to six mugs of coffee is just plain impressive.

You’ll be left with a strong and full-flavored cup of coffee with the French press and it will have a denser feel than other brewing methods. It extracts the earthy, rich flavors of the coffee bean but removes most of the tangy and sour elements. Over-steeping is a potential issue with the French press, however, and if you leave your water in too long with the grounds you might end up with thick, bitter coffee due to the excess of oils present. But hey, maybe you’re into that.

Likewise, grind size is an important consideration for the French press. Using an excessively fine grind can leave you with silt in your coffee since the metal filter won’t strain out the finest bits of grounds. There are more solids in the typical cup of French press coffee, though – it’s nothing like you’d get from a pour over or drip coffee maker. But that’s part of the charm. Using a coarse grind and minding your steeping time is important in deterring this, but many still find that silt is just part of the French press experience.

The Aeropress achieves a strong flavor with less bitterness. Since the grounds are infused quickly, and with even pressure, there is less time for cooling to occur, which is where most of the bitterness of coffee can come from.

Furthermore, the Aeropress doesn’t need any steeping time, which is helpful if you’re the forgetful type who tends to oversteep, but also if you aren’t a fan of “oily” coffee. Since there is no steeping time involved in the Aeropress, there is far less oil present, which is what gives it a lighter flavor and consistency, leading to a cleaner cup.

WINNER: It was hard to say which is “better” when it comes to the final product since it’s mostly based on preference. Both make excellent cups of coffee, and both can be customized for strength. If you prefer strong and full, the French press is for you, if you prefer rich and lively the Aeropress may be better.

The French press is the best way to achieve a robust brew from any type of bean. It also brews the thickest coffee, so if the right texture is high on your list, it’s the option for you. Since the iconic piece doesn’t require filters, it produces less waste as well as requiring less investment for use.

You can choose between glass or stainless steel French presses (here are some of the best) but my personal preference is the glass Bodum Chambord Press. It’s just designed beautifully and has a nice and classic look to it.

The AeroPress produces a thinner finished product but still has the ability to produce strong coffee. It also has a far lower chance of going bitter on you, so if you dislike bitter coffee, but still desire a full flavor, the Aeropress may be a good brewing option. Plus, it takes up very little room – so if you like to travel but don’t like to go without a good coffee, you can’t go wrong.

The all-plastic construction of the Aeropress makes it more resistant to breakage than a glass French press carafe, another reason to choose it for travel.

At the end of the day, it’s all about personal preference: you don’t have to choose either/or. In fact, most coffee obsessed freaks like you and I have both – the French press for lazy days at home and the Aeropress for travel. It’s just one part of my coffee gear collection. Instead of limiting yourself by asking the question: ‘Should I choose a French press or an Aeropress?’ – why not expand your repertoire and start thinking: French press AND Aeropress? 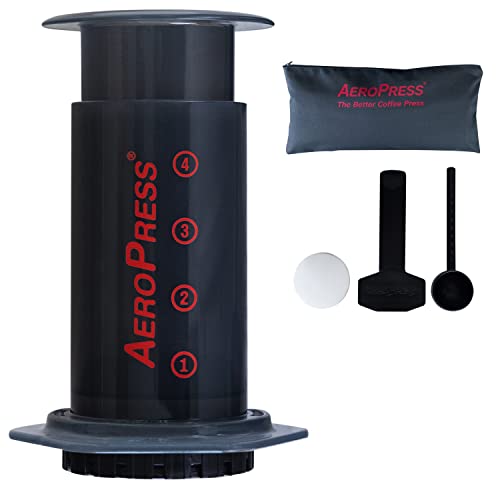 French press coffee is not necessarily stronger than other brew methods. Rather, the coarse filter mesh used in the French press allows more of the coffee’s natural oils and solids to pass through, adding more rich flavor to the cup.

Caffeine content is more dependent on bean selection and coffee to water ratio than on brew method. If you’re interested in coffee with a high caffeine content, check out our article on the world’s strongest coffee.

Scott Fisher
Hi, I'm Scott, and I've traveled extensively through North America and Europe, exploring food and drink pairings around the world. My Love of coffee began during my teen years when a friend's family introduced me to the glories of the classic Italian Moka pot. That technology got me through too many early-morning final exams in college and eventually led to a manual espresso machine after graduation.
JUMP TO:
Old School: The French Press
New School: The Aeropress
The Showdown: AeroPress vs French Press
The Verdict
Frequently Asked Questions