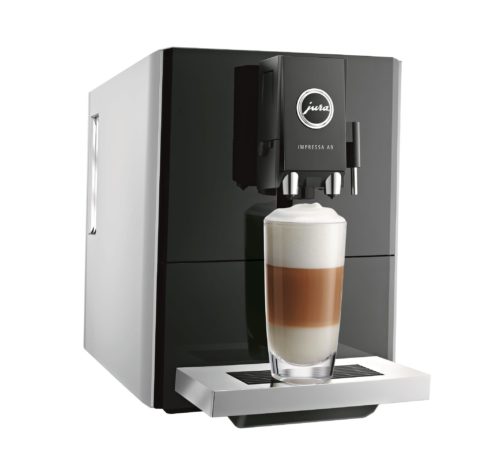 The front is finished in glossy piano black while the sides are brushed aluminum. If you pick up a refurbished model you might find an A9 with glass sides. (1)

Instead of buttons, the Jura A9 relies on a curiously placed touchscreen. Located on the top of the machine and facing straight up, the screen may be challenging to read and see for shorter individuals. Also, in an era where touch screens are ubiquitous this one is almost comically unresponsive. Based on this screen it is easy to understand why Jura’s more expensive E8 foregoes a touchscreen in favor of hard buttons along the periphery of its TFT-LCD screen.

After pre-infusion, the pulse extraction process delivers the pressurized water to the grounds in pulses. By pulsing out the water rather than depositing it in one steady steam, the machine extracts over a longer period of time which develops a more flavorful espresso or ristretto. (4)

You want more customization – The Jura A9 allows you to customize your drinks, but not quite as much as some of its bigger peers. If you want to be able to choose how much foam your cappuccino has, or select a higher temperature for your lattes then the Jura E8 is a great choice. Read our full review here.

You want a more basic espresso machine – If you love Jura’s classic swiss design but don’t plan on making milk-based beverages or already have a separate milk frother, fear not, there is an option for you. Both the Jura Ena Micro 1 and the Jura A1 brew excellent espresso and do not include a milk frothing system. The Ena Micro 1 has been discontinued, but you can still read why we have it a good rating here and perhaps buy it from an alternative vendor online. The A1, however, is still very much available. See what we have to say about it here.

Compact, versatile, and capable of making a variety of drinks, the Jura A9 is a good espresso machine with some nagging shortfalls. Inside its small frame it packs the grinder and brew system of a much larger unit, but lacks some of the customization that you’d expect at this price.

Even if the customization isn’t a deal breaker, the touch screen is disappointing. Ten years ago companies could get away with subpar touch screens, but the technology is fully mature and in a high-end machine people expect better. To check out our thoughts on a host of other Juras, see our full round-up review.