Home » Clever Coffee Dripper Review: It’s not for everyone… 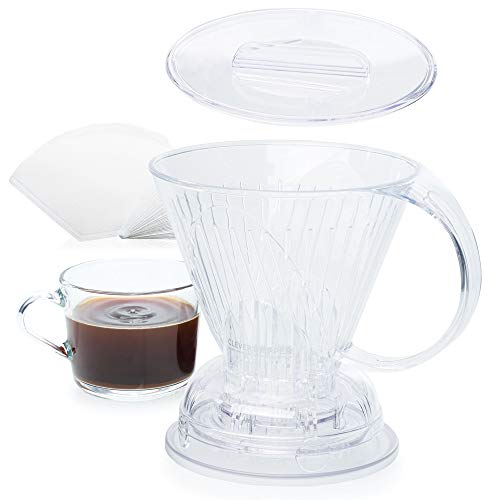 The Clever Dripper is the coffee maker that was created to make manual coffee easy and entertaining. Spoiler alert: it worked. For that reason, it’s one of our favourite pour over brewers; it’s easy to use but still makes a killer cup of pour over coffee. It’s shaped just like a standard pour over brewer, but a valve on the bottom allows you to hold hot water in the brew cone. Because of this, the Clever is considered an immersion-style brewer, meaning you can produce something like French press coffee but without the muddy layer of fine coffee grounds at the bottom of the cup. Clever, indeed.

It is an uncomplicated tool to use and allows even the newbie to brew coffee with minimal effort. It works well with dark roasts and it creates a full-bodied cup that feels strong and highlights rich, chocolatey flavours.

It isn’t always as efficient (1) at extracting all the solubles from your beans as drip brewing, but it produces a much fuller-feeling, stronger-tasting cup of coffee. If you love savouring the delicate coffee oils locked in your beans (which are often the fruitier and more acidic flavours), immersion isn’t the best way to brew coffee.

However, if you prefer coffee beans that yield richer, more chocolatey flavours, then this style is right up your alley. Letting your coffee grounds steep allows them to infuse with the water, creating a more full-bodied cup of coffee.

Does that affect the way your coffee tastes? Only in that it helps extract all those lush, full flavours from the immersion part of the brewing cycle, then strains out the fines and grit with the filter. But if you’re about the timeless visual effect as much as the awesome extraction, the Clever Dripper isn’t an A-lister, design-wise.

It wasn’t an exaggeration when I said that brewing with the Clever is just about as easy as it gets. You can try different techniques, but all you need to do to brew great coffee with the Clever is pour in the grounds, fill the cone with water, keep an eye on the steeping time, and then drain. Home Grounds’ resident brewing expert Steven walks you through it in this video recipe:

As for the immersion portion, the longer you leave your grounds in the hot water before releasing the brew, the more flavour you’ll extract in the finished product. The instructions with the Clever Dripper recommend three minutes, and that’s certainly a good starting point; adjust up or down to make it taste the way you want it.

Drip brewing lends itself well to highlighting the complexity of a coffee. It tends to accentuate delicate flavours and aromas.

Finally, immersion lets you control the intensity of flavour, meaning that the Clever Dripper and easily produce a brew that works as iced coffee.

Pricewise, the Clever Dripper falls into the upper-middle of our pack of pour over coffee makers, no doubt due to the complexity of manufacturing the valve and release mechanism. And since even the larger size only makes 475 ml of coffee at a time, it’s essentially a one-person brewer. (Yes, the larger size is rated at 18 oz. (530 ml), but look closely – that’s the volume of coffee AND water in the filter cone. The brewed coffee yield is 475 ml)

You want to brew multiple cups at a time – The Clever Dripper is available in two sizes, the larger of which yields 475 ml. If you want to drink multiple cups without having to stop and brew each time, consider a coffee maker with more volume like the Chemex. 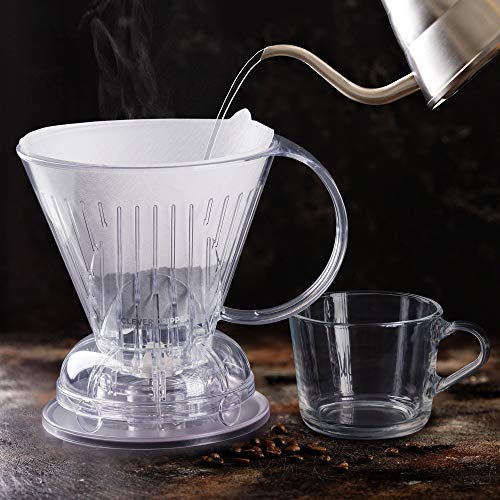