Contents show
The 5 Best Eureka Grinders of 2021
1. Eureka Mignon Specialita – Best Overall
2. Eureka Atom 75 – Best for Espresso
3. Eureka Mignon Brew Pro – Best for Filter Coffee
4. Eureka Mignon Crono – Budget Pick
5. Eureka Oro Mignon XL – Most Advanced
How to Choose the Best Eureka Grinder
What do you like to drink?
How much grinding do you need to do?
All about burrs
Verdict
FAQs
Where are Eureka grinders made?
How do I clean a Eureka coffee grinder?
What is the best cheap coffee grinder?

So you’re ready to take your coffee to the next level? A great first step is to upgrade your grinder. For that, you’ve come to the right place!

Italian brand Eureka makes some of the best in the business. And with so many models, there’s sure to be a perfect grinder for you. Just keep reading, and we’ll find it.

Four of the five top Eureka grinders are from the popular Mignon series. So let’s take a second to discuss features common to all of them.

First of all, every Eureka grinder is blessed with its Stepless Micrometric Adjustment System. This patented design makes infinite adjustments precise and easy by moving the lower rather than upper burr. It also allows you to perform maintenance without losing your grind setting.

According to David Schomer, this level of control is vital, who literally wrote the book on espresso (1).

We all adjust the grinder often in response to environmental changes…Any grinder needs continuous, stepless grind adjustment capability, rather than stepped settings.

The great news is that each Mignon, and the Atom, also come with Eureka’s Anti-Clumps and Electrostaticity (ACE) technology. The ACE ensures consistent, fluffy grounds and keeps your work area clean.

The Mignons are similar in appearance, with a boxy shape and unique square hopper. They’re unusually compact, which is perfect if you have limited space. Every model fits comfortably under upper cupboards.

With those similarities out of the way, let’s move on to discuss what makes each Eureka grinder unique and when you’d want to use it. 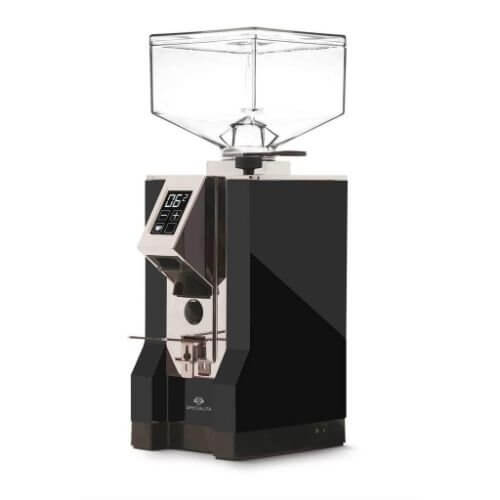 Except for the new Oro model, the Specialita is the top-of-the-line Mignon. It’s an all-purpose grinder with specially shaped burrs suitable for espresso or drip coffee. This versatility, coupled with its reasonable price, makes it our overall favourite Eureka grinder this year.

Specialita’s larger 55-mm burr set and its programmable LCD touchscreen make it stand out from other grinders in the series.

With the display, you can easily program two timed doses for a single and double shot. These are dispensed hands-free as the portafilter rests in the adjustable forks.

This grinder features Eureka’s Silent Technology, a noise-dampening design that reduces volume by about 20 dB. A High-Speed Maintenance feature makes it quick and easy to access the burrs inside.

The Specialita is often compared to the less expensive Mignon Silenzio. The latter is a similarly excellent grinder but lacks an LCD and has a smaller 50 mm burr set. Its relative quiet is ostensibly its selling point, but with the same Silent Technology as the Specialita, it’s only marginally quieter due to the smaller burrs. 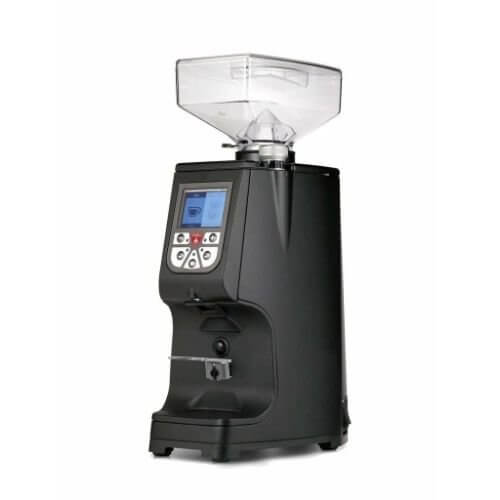 The Atom 75 comes at a much higher price point than the Mignon series, but its cost is justified by additional features and a bigger burr set. If you’ve invested in a high-end prosumer espresso machine, this coffee grinder is a worthy accompaniment.

The 75 mm flat steel burrs are the largest on this list, ensuring super-fast grinding. This gives the beans less time to heat up, so all other things being equal, you’ll get a better-tasting espresso — not to mention an efficient workflow. However, it can make it a little intimidating to dial in dose timing. Alternatively, the cheaper Atom 65, with a smaller 65 mm burr set, is another excellent choice.

The digital colour display is another standout aspect of this grinder, making it easy to program dose timing. And a surprise feature that you’ll like more than you expect is the little LED light that automatically illuminates the portafilter when you insert it. Finally, the Atom includes a Blow-Up system not found on the Mignons, which minimises ground retention. 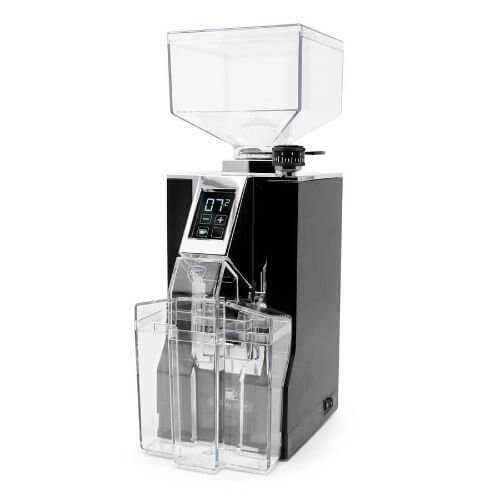 The Brew Pro is similar to the Specialita but with a focus on filter coffee. It has the same flat 55 mm hardened steel burrs, the same LCD and Silent Technology, and very close to the same price.

The main difference is that it is optimised for coarser grounds for drip brew or French Press, which according to Seattle Coffee Gear, is all about consistency.

In the case of a great drip brewer we’re more interested in control settings and consistency than getting as fine as possible.

Instead of forks for holding a portafilter, it has a plastic bin to catch ground coffee. The Brew Pro is also one of few Mignon grinders offering the Easy Setting System, making it quick and convenient to adjust the grind size. 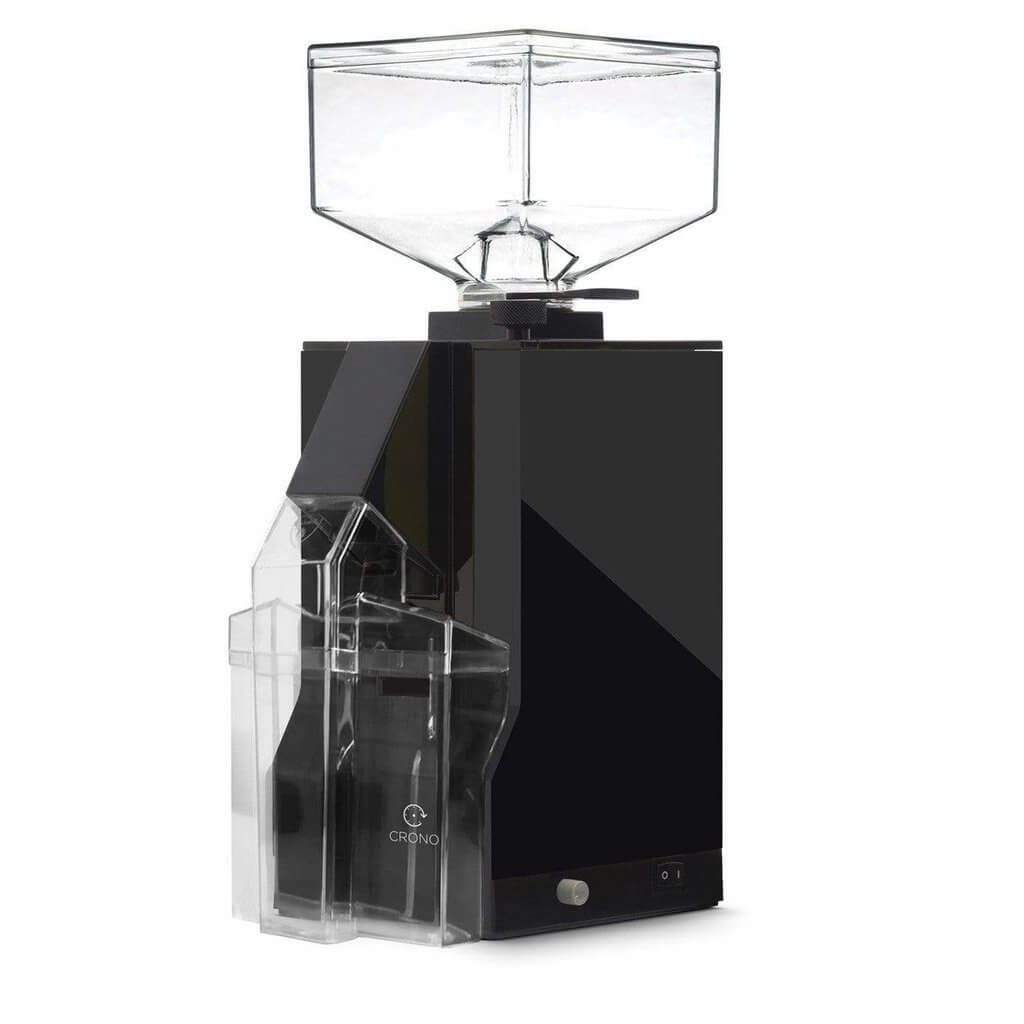 The Crono is Eureka’s bare-bones budget grinder. But the main sacrifices have been made in the display and programming, so it’s still competent. It features a quality 50 mm flat burr set and micrometric adjustment system tunable from Turkish fine to French Press coarse. This model is sold with a grounds bin rather than a portafilter holder, suggesting it is coffee rather than espresso focused.

The main money-saving feature of this grinder is its simple timer, from 5 to 60 seconds. There is no fancy LCD touchscreen display or programmability. 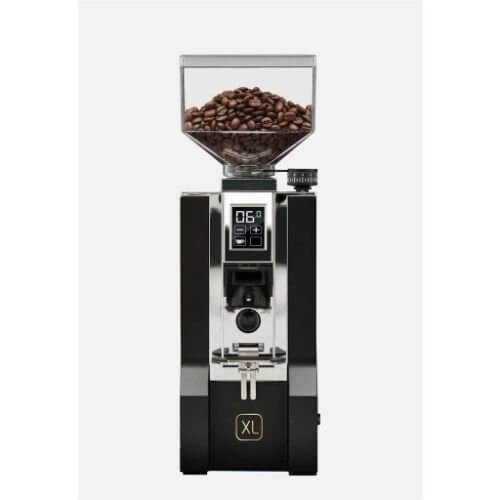 Eureka released the brand new Oro line just last year to commemorate Eureka’s 100th anniversary (2), but it has already produced one best-selling model, the Mignon XL. In terms of price and technology, this grinder bridges the Atom and Mignon series gap.

The Oro Mignon XL has large 65 mm burrs made from a patented material Eureka calls Diamond Inside. They maintain their sharpness longer and produce more consistent results over time.

Eureka has worked to reduce any issues with retention in this grinder, claiming as little as 0.2 g. This is even an improvement over the more expensive Atom 75 and promises more consistent and flavourful brews.

The Oro Mignon XL is remarkably quiet, despite its large burr set. Eureka has advanced its noise-dampening technology to reduce this grinder’s volume by about 60 dB. And it’s the only Mignon grinder sold with a mat kit, keeping spilled coffee off your countertop.

How to Choose the Best Eureka Grinder

While Eureka’s extensive line-up might feel overwhelming at first, it makes it much easier to get the perfect grinder for your needs. Each grinder has a specific set of features, so you won’t have to pay for anything you don’t need.

This buyer’s guide is here to walk you through the vital grinder specs so that you can hone in on that ideal model.

When buying any coffee equipment, the first thing to consider is how you take your coffee. Do you prefer drip brew, espresso, or the option of either?

If you only drink drip coffee, you can usually get away with a less expensive grinder because you don’t need the ultra-fine and consistent grounds required for espresso. For Eureka grinders, that means looking at the Brew Pro or Crono models.

In contrast, if espresso is your drink, you definitely want to spend a bit more for a grinder up to the task. This includes the Specialita, the Oro Mignon XL, and the Atom series, all of which come with a portafilter holder that designates them as espresso-focused.

If you want a versatile grinder, your best bet is the Mignon Specialita. It includes specially designed Espresso & Brew burrs, which are shaped to yield perfect grounds at any size. You can also optionally add a grounds-catching bin to your purchase to replace the portafilter holder.

How much grinding do you need to do?

The capacity of all Eureka’s domestic grinders is very similar. Each comes with a standard 300 g bean hopper, or you can pay a bit more for a larger 500 g hopper.

The grind output of each varies with burr size. The larger the burr set, the faster the grind.

However, even Eureka’s slowest grinder, outputting 1 g/s, is plenty fast enough to fit your workflow in the home setting. That said, faster grinding does allow the beans to remain cooler, which arguably produces a better-tasting brew.

Prosumer-level coffee grinders like these usually have flat or conical burrs. Both shapes have pros and cons, which you can read about in our flat vs conical burr grinder article.

More often than not, expensive grinders use flat burrs, which is true of all Eureka’s on-demand grinders. Flat burrs are known for producing more consistent grinds because they are easier to align.

If you’re looking for a grinder with conical burrs instead, consider the bargain-priced Baratza Sette 270 or the more expensive Niche Zero.

Burr material has as much to do with longevity as it does with grind quality. Most Eureka models use steel burrs, which wear faster than ceramic but are sharper and less brittle. They also heat and cool more quickly.

The exception is the Oro line which relies on Eureka’s newly patented Diamond Inside burrs. This guarantees better wear resistance for a longer-lasting and more consistent burr set.

On very expensive grinders, you’ll often find titanium or titanium alloy burrs. If you buy the Atom grinder, you’ll have the option of swapping in titanium or Diamond Inside burrs, but prepare to pay extra for these upgrades.

Eureka is one of the most trusted names in prosumer coffee grinders for a good reason. They are one of few brands to specialise in the field, and they’ve been doing it for over a century.

For a versatile and easy-to-use grinder, our top pick this year is the Eureka Mignon Specialita. With 55 mm flat steel burrs and a wealth of advanced features, including an LCD touchscreen, it’s sure to up your brewing game.

Eureka makes its grinders in Florence, Italy, where they’ve been hand-assembled since 1920.

Eureka grinders are known for being easy to clean, especially those with High-Speed Maintenance. The basic idea is to remove the top panel to gain access to the burr set. Then remove the top burr and clean any loose grinds from the mechanism.

Don’t try to go too cheap on a grinder or you’ll be letting down your coffee. At the very least, you need a burr grinder. One way to save money while still getting an excellent burr set is to opt for a manual grinder (3).

For affordable electric grinders that are still a cut above blade grinders, check out our review of the best home coffee grinders. 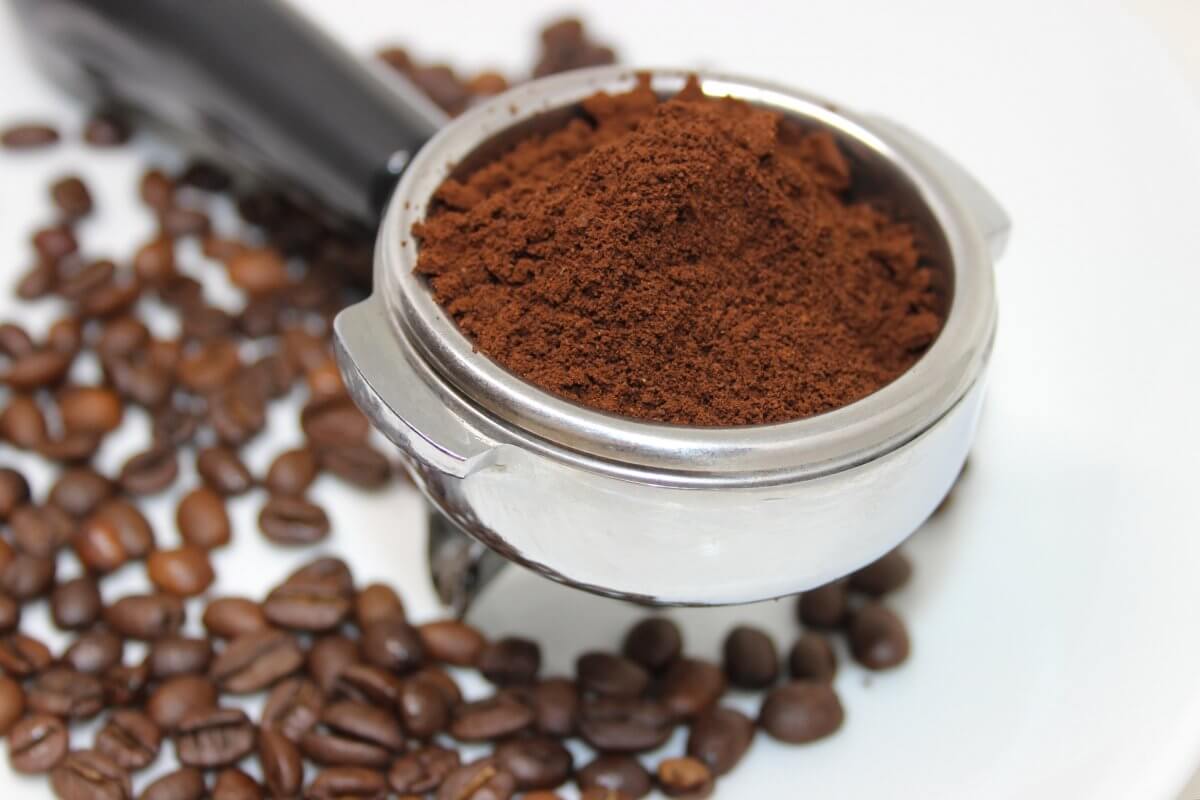 Julia Bobak
I love trail running, rock climbing, coffee, food, and my tiny dog — and writing about all of them. I start every morning with a fresh Americano from my home espresso machine, or I don’t start it at all.
JUMP TO:
The 5 Best Eureka Grinders of 2021
How to Choose the Best Eureka Grinder
Verdict
FAQs