Contents show
Why do we steam or froth milk?
What is steamed milk?
What is frothed milk?
Does type of milk matter?
The Verdict
FAQs
What is a cortadito?
Can I use foamed milk for hot chocolate?
What is scalded milk?

Are you confused about the difference between frothed milk vs steamed milk? Don’t worry; you’re not alone. There’s so much confusion around the topic that many people use the terms interchangeably. But they aren’t the same. And if you ever want to master the perfect latte or cappuccino at home, you’ll need to know the difference. So let’s get to it!

Why do we steam or froth milk?

Before we get too deep into the details, let’s talk about why we would want to froth or steam milk in the first place.

Both are examples of foamed milk, and both change the milk’s texture. Whether you’re frothing or steaming milk, you’re adding air to it, which gives it a lighter body and creamier mouthfeel. If you’re heating the milk simultaneously, using a steam wand, for example, you’re also giving it a sweeter and richer flavour.

This combination of sweet flavour and creamy body pairs beautifully with the natural chocolate, nut, fruit, and caramel notes often found in a cup of coffee, hence the ongoing popularity of milk-based coffee drinks (1).

What is steamed milk?

Steamed milk is created using a steam wand, which injects a powerful stream of steam into the milk.
As you add steam, the heat breaks down the fat in the milk and creates tiny air bubbles. You’ll often hear baristas refer to this as microfoam, and it’s crucial for latte art. The proteins in the milk provide the structure to hold these tiny bubbles, says professor Thom Huppertz (2).

When air or steam gets introduced into the milk, the air bubbles that are formed rapidly become covered by the milk proteins. The surface covering of the milk provides the bubbles with the required stability.

The result is an ultra-creamy milk texture that appears to have the consistency of house paint but feels light on the tongue. People often describe it as smooth and velvety.

The classic drink to sample steamed milk is the latte, which consists of one-third espresso and two-thirds steamed milk, sometimes with a thin layer of milk foam. Other hot drinks with steamed milk include the cortado and latte macchiato.

Want to try it at home? You’ll need an espresso maker with a steam wand, cold milk in a pitcher, and a bit of time to practice. When steaming milk, you put the tip of the steam wand just under the surface of the milk and angle it to create a swirling vortex of milk. The swirl ensures the entire pitcher of milk is heated and aerated evenly. Keep steaming until you heat the milk to the appropriate temperature, about 140 – 150 degrees Fahrenheit.

What is frothed milk?

Frothed milk is like steamed milk in that you are adding air to change the milk’s texture, but that’s where the similarities end.

The air bubbles in frothed milk versus steamed milk are much larger, with a larger volume and much lighter feel. It seems to disintegrate on the tongue. Baristas typically refer to frothed milk as “drier” than steamed milk because it contains more air and less water.

If you’ve ever seen the foam layer on a cappuccino extending well over the brim of the mug, you know what I mean. Frothed milk can hold its shape.

Another thing that distinguishes frothed milk from steamed is that you don’t need to use steam when frothing milk, which makes milk frothing much easier for home baristas. You don’t necessarily have to own an espresso machine with a steam wand. You just need a milk frother.

There are several ways to froth milk and styles of the milk frother because all you need to do is introduce air. You can even froth cold milk for cold drinks. Using a manual frother, electric milk frothing pitcher, or a hand-held frothing wand, you can do this. Or you can use a French press, vigorously moving the plunger up and down to work air into the milk.

For a detailed guide, check out our whole article on how to froth milk.

Of course, if you do have an espresso maker, you can also use a steam wand. That’s how the pro baristas at your local coffee shop are doing it. When frothing milk, you want to hold the steam wand tip just at the surface of the milk, rather than under the surface, and then create the same milky vortex.

The best drink to sample frothed milk is the classic cappuccino, which is one-third espresso, one-third steamed milk, and one-third frothed milk. Or try a macchiato, which also sports a dollop of hot milk froth.

Does type of milk matter?

As long as you use the proper technique, you can make foamed milk with any milk. But the texture, taste, and structure of your foamed milk will vary. It all relates to the ratio of fats to proteins in the milk.

If you’re using standard dairy milk, the most common choices are 1% or 2% milk. These have a nice balance of protein and fat that makes them easy to foam and produce a rich and creamy texture. Non-fat milk can quickly become foam because of its higher protein content, but it won’t have the same luscious mouthfeel without any fat. Whole milk is undeniably delicious, but it takes a bit more skill to foam properly. Likewise, you can even steam half-and-half for a drink called the breve, but don’t expect a light and airy foam.

These days, plant-based milks are increasingly popular, but some are better than others for turning into foamed milk.

None of them naturally have the identical make-up as dairy milk, so in all cases, you want to look for ones labeled “Barista Version.” These have added fats and stabilisers to ensure that you get the same texture as with dairy milk.

You also need to consider taste. The famous almond, soy, and coconut milks, for example, all have a strong flavour that might or might not pair well with your coffee. Oat milk is trendy among baristas for its neutral taste and creamy texture (3).

A cortadito is a Cuban drink that resembles the cortado. It consists of a 50:50 ratio of sweetened Cuban espresso, often prepared in a Moka pot, to steamed milk.

Yes, you can use foamed milk for hot chocolate. It’s an excellent way to add an even creamier texture to your drink, whether the foamed milk is steamed or frothed. If you want to make it unique, you can even foam chocolate milk.

Scalded milk is any dairy milk that has been heated past 181 degrees Fahrenheit. This alters its chemical properties and changes its flavour and texture. For the traditional Italian espresso-based drinks, like lattes and cappuccinos, you never want to get your foamed milk this hot. But scalded milk is used in some drinks, like the Spanish cafe con leche. 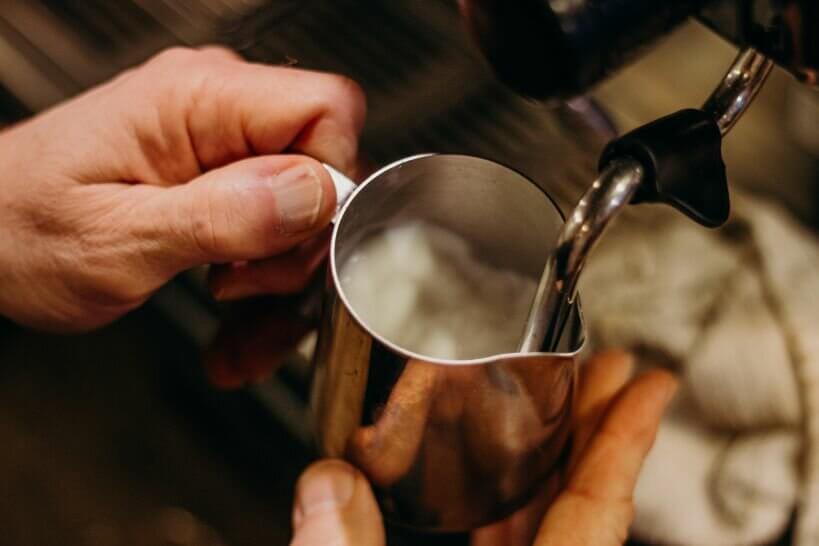 Julia Bobak
I love trail running, rock climbing, coffee, food, and my tiny dog — and writing about all of them. I start every morning with a fresh Americano from my home espresso machine, or I don’t start it at all.
JUMP TO:
Why do we steam or froth milk?
What is steamed milk?
What is frothed milk?
Does type of milk matter?
The Verdict
FAQs