We feature Haitian beans in our ‘best of’ list for coffee beans around the world. You can find that article here: https://www.homegrounds.co/uk/best-coffee-beans-bucket-list

In addition to coffee prices and politics in recent decades affecting profitability, environmental factors and plant diseases like coffee rust (11) have reared their ugly heads as well. In fact, the link in the previous sentence discusses how Haiti’s coffee production struggles are a harbinger for the surrounding coffee-growing countries of Central America, like Puerto Rico, El Salvador, and Jamaica, to take careful notice of! 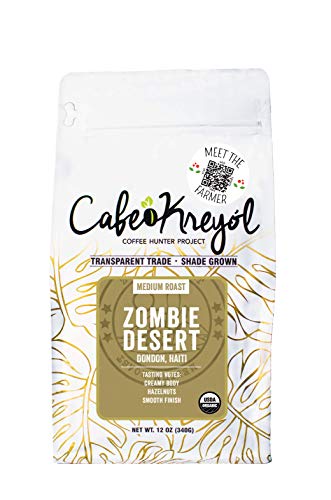 This company, born from a tough-as-nails founder with a vision to revitalize Haiti’s floundering coffee world, attempts to facilitate Direct Trade practices with Haiti’s coffee farmers. Their focus is transparency in regards to where the coffee is coming from, and overall respect for both Haiti’s farmers and coffee.

Coffee from Cafe Kreyol might cost a bit more, but you can expect the absolute highest quality possible.

If you’re looking for Haitian green coffee beans to roast at home, Coffee Bean Corral is the perfect answer to your quest.

This batch of Haitian Blue Organic green beans is of the Blue Mountain variety (growing from the same plant as Jamaican Blue Mountain coffee), and is grown nearly 4000 feet above sea level. The cherries are organic certified and wet-processed. The coffee itself has a pleasant aroma and is modestly bright, sweet, and has a medium body.