What is French Roast Coffee?

Dark roasts, light roasts, medium roasts, oh my! These are things we can understand, right? Then why do those punk roasters have to go and throw extra categories in there, like French roast? When I hear French roast, I think, “Okay, a darker roast…” and that’s it. But that can’t be it, right? There has to be more!

With that thought gnawing in my brain, I embarked on a mission to answer: What is French roast coffee?

Simply put, “French roast” describes the color of the coffee beans after they have been roasted. These beans are on the darker end of the scale, and are usually the color of dark chocolate. It does not mean the coffee was grown or roasted in France (although yes, that is where the roasting style originated in the 1800s).

The name is believed to reflect the tastes and traditions of coffee roasters in Europe in the 19th century, where dark roasted coffee was all the rage. Italian roast, or espresso roast, was nearly as dark as French, and Vienna roast – a staple of the Viennese cafes and pastry shops known for their great coffee – was slightly lighter than Italian roast. But the French proudly took the honors as the darkest roast of all.

Many different kinds of beans can be roasted to the French roast level, and they do not need to originate from any specific region to qualify. French roast coffee can be made from Central American, African, or Indonesian beans.Essentially, beans grown anywhere in the world can be used to make French roast.

How Roasted is French Roasted?

So we’ve established that French roasted beans are pretty dark. But how dark is that compared to other coffees? While guessing at colors and comparing coffee beans to chocolate bars are the layman’s ways of figuring it out, there is an official way to determine this as well  (1).

The Specialty Coffee Association of America uses a tool called the ‘Agtron Gourmet Scale’ to categorize coffee roasts on a scale of 25 (darkest) to 95 (lightest).

French roasts tend to fall somewhere between 28 and 35. So as a general rule, French roasted coffee is some of the darkest coffee out there.

Home roasters looking to try their hands at French roast will be looking for the “second crack,” signifying that the coffee beans’ internal structure is beginning to collapse. This corresponds to an internal temperature of at least 240 C (464 F). If you’re roasting French at home, you should also look for the tell-tale sheen of oil on the beans, giving them a glossy look (and making them a pain to clean out of your grinder, but that’s another story.)

How does It Taste?

While there is a lot of variety between French roast coffees, there are some similarities in the taste as well. The temperature is high enough with a typical French roast that it brings the oils to the surface of the bean, giving a roasted, smoky flavor to the coffee itself.

French roasts can also feature lighter elements, too, like berry or citrus aromas, in spite of the dark roasting process. And French roasts from Indonesia, especially from Sumatra, often have an earthy, mushroom-like umami flavor that sets off the dark brown roasting level beautifully.

In the subcategory of different dark roasts, you start to get very subtle differences from one roast to another. For example, while some people place French roast as the darkest you can get, it has some stiff competition when measured up against, say, an Italian roast.

Italian roast coffees (which again refers to the roast type and does not indicate where the coffee was grown) are super dark, and tend to be even oilier than French roasts!

Really, the best way to learn about different roast types is through experience. Get some different kinds of beans, observe their unique qualities, and take notes!

Thinking of roasting your own coffee at home? Start here.

If you’re wondering how to make French roast coffee, you can rest at ease – it can be made like any other coffee! Just expect a good, full body of flavor with each brew. This is heavyweight stuff. It has that earthy, roasted, smoky flavor, although, interestingly, often the darker the roast the lighter the caffeine (2).

As far as French roast coffee brands go, there are tons of them out there, and they’re not hard to find. For example, here’s a great option from Koffee Kult that showcases French roasted coffee beans from Colombia and Brazil (3), and another kick-ass roast (4) from Kicking Horse.

Should You Avoid French Roast Coffee?

Not everyone loves the ultra-dark, smoky flavor of French roast coffee. And there are a few specific things to look out for, and solutions to the problems they represent:

If you like a truly smoky, pungent dark roast coffee, there’s no reason to be afraid of the dark. If you choose quality beans and brew them carefully, French roast can provide you with a truly delicious cup of coffee.

“First crack” in coffee roasting refers to the sound when coffee beans “crack” at a temperature of approximately 196 degrees Celsius (385 degrees Fahrenheit). This is followed by the “second crack” at approximately 224 degrees C )435 degrees F), which is the stage required to produce French roast coffee. 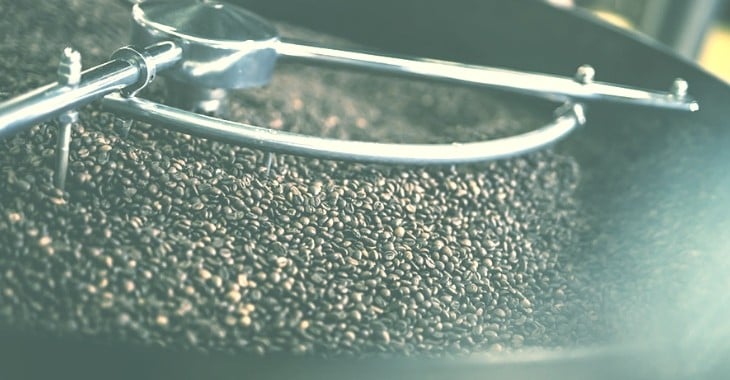