What’s Nitro Coffee? Everything You Need To Know…

Contents show
Nitro Cold Brew Coffee = Cold Brewed Coffee… Infused with Nitrogen.
What Does It Taste Like?
What Should It Look Like?
Is Nitro Healthier Than Normal Coffee?
Why Lower Acid?
Can You Make Your Own Nitrogen Infused Coffee?
So What Is Nitro Coffee?
FAQs
Does nitro-infused coffee have alcohol?
Is nitro style coffee healthy?
Do you put milk in nitro cold brew?

You may not have seen nitro brew coffee on the menu at your local coffee shop yet, but it will be there soon.

First concocted in 2012, this coffee drinking innovation is quickly making its way into the mainstream: Starbucks and Dunkin Donuts are getting in on the game.

But what is nitro coffee? (Otherwise known as nitro cold brew coffee.) How is it made? How does it taste? And should you try it?

We put gases into cold beverages all the time; the gas carbon dioxide is what gives soda pop its characteristic bubbles and is why we refer to it as being “carbonated”.

Nitrogen itself is already popularly used in certain beers, the most recognizable of which is Guinness. Instead of calling them “carbonated”, these beers are referred to as having been “nitrogenated”.

In fact, many nitro beers are brewed with the dark flavors of coffee. These (along with coffee beer) simply make life better.

So it was only a matter of time before someone had the brainwave that the creamy texture of Guinness would be equally well-suited to cold brew. Like beer, nitrogenated coffee is only available “on-tap”. The nitrogen infused cold brew is released through a pressurised valve with tiny holes to create a creamy effect.

Much like typical cold brew, nitrogen infused coffee is extremely smooth and low in acidity, but it has a uniquely silky mouthfeel. It’s fast becoming one of the coffee drinks of choice in the speciality coffee world.

This is because nitrogen gas doesn’t dissolve in liquids as well as carbon dioxide, so the bubbles in a nitrogen infused beverage are much smaller (2).

..It forms very small bubbles, which do not change the taste of the coffee but do affect the texture.

Most fans of the nitro-brew drink it black, either straight up or poured over ice, relying on the natural creaminess of the product rather than the addition of dairy. For those with a sweet tooth, many shops offer it enriched with sweet cream or vanilla syrup.

At the Manhattan coffee shop Mighty Brew Bros (​3), it is used in cocktails like a nitro pina colada and paired with vanilla ice cream in a nitro float. Owner Josh Kim claims that the nitrogen-infused coffee takes well to more flavors as compared to other coffees.

Many shops market and sell nitrogenated coffee using its visual appeal. As it is poured from a tap, it produces a coffee cascade of careening bubbles that is undeniably beautiful.

The cascade effect, which is also apparent in nitro beers, arises because the nitrogen bubbles are so small that they are easily pushed around the glass by the flowing liquid.

Check out this video to witness the effect for yourself:

Is Nitro Healthier Than Normal Coffee?

Increasingly, nitrogen infused coffee is being marketed to gym-goers as a healthier alternative to traditional coffee. In fact, many high end gyms are now offering it on tap.

The reason for the health claims is that infusing a drink with nitrogen imparts both a natural sweetness and an inherent creaminess. The nitro foam hits the tongue in particular places that give the perception of sweetness without the need for sugar.

For anyone used to doctoring their morning java with high-calorie cream and sugar, nitrogenated coffee is a gateway to low calorie black coffee – without compromising on taste.

Additionally, it has a higher caffeine content than standard coffee because it contains less water, making it an excellent choice to get amped up before a hard workout.

Like all cold brews, the nitro version is very low in acid, which is beneficial to coffee drinkers who have sensitive stomachs or are prone to heartburn and acid reflux.

If you struggle with acid reflux or indigestion, or even if you simply don’t love the taste of highly acidic coffee, nitrogen coffee may be the smooth and silky answer you’re looking for… but why?

While the coffee beans used in the brewing are often the culprits for higher acidity, in the case of nitro cold brew, it’s actually the brewing style itself that helps keep the acid on a low-key note. How? By brewing at lower temperatures (4)!

See, most acids that get into hot brewed coffee are pulled out of the beans as hot water is added. The steamy liquid extracts the acids along with the flavors, oils, and caffeine.

However, with nitro cold brew being brewed at lower temperatures from the get go, an opportunity for the higher doses of acidity to get into the beverage never presents itself.

An added benefit of this brewing method is the fact that the lower acid typically means the drink tastes much less bitter, a factor that any fan of nitro cold brew will undoubtedly attest to.

And at the end of the day, it’s largely those lower levels of acidity and bitterness that keeps this drink mellow, relaxed, and as easy on the stomach as it is on the taste buds.

Can You Make Your Own Nitrogen Infused Coffee?

There’s no way around it, nitrogen enriched cold brew is expensive. Regular cold brew is already much pricier than regular coffee thanks to the need for a long brewing time and double the grounds, and most shops charge at least another dollar for the nitro version.

If you’re hooked on the stuff, consider investing in the tools to make your own at home. The cheapest way to do so is to purchase a whipped cream dispenser, the type with a nitro charger. Fill it with your own homemade cold brew and dispense it into a glass as you would whipped cream. Here are some guides to get you started:

Willing to fork out the cash, but just don’t want to leave the house? A few shops are now marketing canned nitro brew. Just make sure you invert it into a glass before drinking. Consuming it straight from the can not only ruins the silky mouthfeel, but also means you’ll miss out on the drink’s visual appeal.

So What Is Nitro Coffee?

It’s the sweet, creamy, silky version of cold brew that’s taking the world by storm right now. Whether you’re looking for a healthier way to get your morning coffee fix or just a fresh way to enjoy a cold caffeinated beverage, give this innovative new coffee a try!

Do you have any questions we didn’t answer? Let us know in the comments below.

No, nitro-infused coffee has no alcohol, although there are plenty of things that lead to this misconception. Some people assume that it contains alcohol since the drink is processed using nitrogen, the same ingredient used in making certain beers like Guinness.This drink and some beers also have the same texture and mouthfeel. Let’s not forget the fact that some nitro beers are imbued with the dark flavors of coffee. Another common factor beer and nitrogen-infused coffee share is that some of them are served straight from the tap.

Nitro style coffee offers the same health benefits as that of cold brew coffee. It is low in acid, which makes it great for coffee lovers who have sensitive stomachs. Its infusion with nitrogen adds a hint of creaminess and sweetness, meaning no more extra sugar or cream – a great thing for people who watch their calorie intake.

Nitro cold brew is naturally sweet and creamy, hence, a lot of people don’t feel the need to add milk/cream (or even sugar) in it. If you ask us, we like our nitro cold brew sans any add-on. But if you like your drink sweeter, milkier, and creamier, then go ahead and add milk in it. 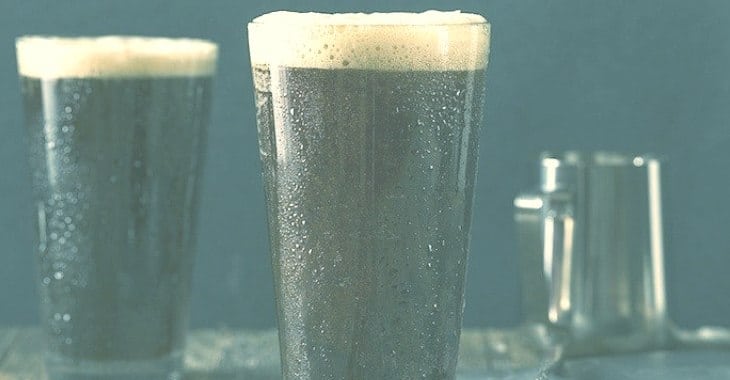 Alex Azoury
Alex is an Editor of Home Grounds, who considers himself as a traveling coffee fanatic. He is passionate about brewing amazing coffee while in obscure locations, and teaching others to do the same.
JUMP TO:
Nitro Cold Brew Coffee = Cold Brewed Coffee… Infused with Nitrogen.
What Does It Taste Like?
What Should It Look Like?
Is Nitro Healthier Than Normal Coffee?
Why Lower Acid?
Can You Make Your Own Nitrogen Infused Coffee?
So What Is Nitro Coffee?
FAQs