Where is Kona Coffee Grown?

Contents show
The Kona Coffee Belt
Just the Right Climate
The Importance of Altitude
The Perks of Volcanic Soil
FInal Thoughts
FAQs
Why is Kona coffee so expensive?
What is special about Kona coffee?
Where else is coffee grown in Hawaii?

Close your eyes and imagine a paradise with sunny days, mild nights, soaring volcanoes, and some of the best coffee on the planet.

Now open your eyes and book a ticket to Hawaii, because that utopia exists, and it’s called Kona, the origin of the world-famous Kona coffee.

So, where is Kona coffee grown? Kona coffee beans are grown in the Kona district of Hawaii, the only coffee-growing state in the U.S.

The Kona district occupies much of the big island’s west coast. Still, only a small portion is suitable for producing the famed Kona coffee (1).

This is known as the Kona Coffee Belt. It’s about 30 miles long and 2 miles wide and lies along the western slopes of the Mauna Loa and Hualalai volcanoes, between 500’ and 3,200’ elevation. Within this region are hundreds of separate coffee farms, most small and family-owned.

Coffee trees are very particular. They thrive in a climate that is neither too cool nor too warm, neither too sunny nor too cloudy. Kona is blessed with just these conditions (2). Most days offer sunny mornings, dark afternoons, and mild overnight temperatures with little wind.

In Kona, we have weather that’s both cool enough and warm enough

The seasonal distribution of rainfall also plays a significant role in making Kona coffee beans so special. The coffee plants develop during the summer rainy season and then are harvested and dried in the arid and sunny winter months.

The Importance of Altitude

There’s a reason why all the world’s best coffees are grown at high elevation. The challenging environment causes coffee fruits to develop more slowly, which yields a denser and more flavorful bean. Additionally, the mountain slopes facilitate water run-off, so the plants absorb less water.

Kona coffee beans are grown at lower altitudes than most other top coffee producing regions, but don’t worry you.

Hawaii is a big island uniquely far north of the equator, which means even low-altitude coffee beans mature slowly. If farmers ventured any father up the slopes, it would only be too cold.

The Perks of Volcanic Soil

The slopes of volcanoes are home to many of the world’s best coffee growing regions thanks to their fertile soil, and Kona is no exception. The soil in the area is rich in minerals, providing a natural source of fertilizer, and it is porous, for efficient water drainage.

Hawaii’s Kona region has the perfect mix of climate, geography, and geology to make it home to some of the world’s most sought-after coffees. If you’ve yet to experience 100% Kona coffee, brew up a cup today and see what all the fuss is about.

Kona coffee is expensive for two main reasons, the cost of U.S.-based labor and the limited supply. The grade of the coffee can also influence the price. Learn about Kona coffee grades here. 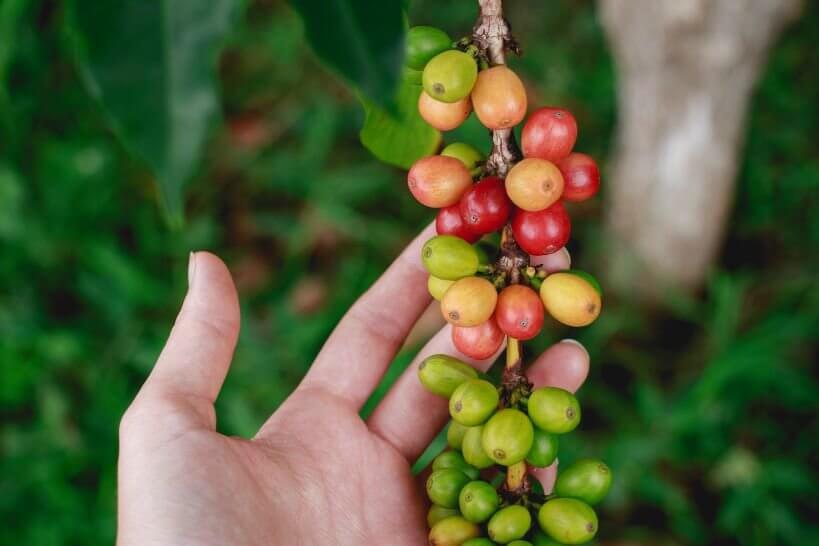 Julia Bobak
I love trail running, rock climbing, coffee, food, and my tiny dog — and writing about all of them. I start every morning with a fresh Americano from my home espresso machine, or I don’t start it at all.
JUMP TO:
The Kona Coffee Belt
Just the Right Climate
The Importance of Altitude
The Perks of Volcanic Soil
FInal Thoughts
FAQs