Why Is Coffee Called a ‘Cup of Joe’?

Contents show
Just A Cup Of Joe Please – An Association Of Averages
Simple Linguistics
Mocking the Boss
It’s Probably Just Marketing
What About Other Fun Slang Terms For Coffee?
The Verdict – Why Is Coffee Called A Cup Of Joe?
Frequently Asked Questions
Why is coffee called “Java”?
What does “Jamocha” mean?

Fancy a cup of Joe? Where does the term cup of joe come from? Of all the nicknames to grace the drink world, “Joe” has to be the strangest. If you happen to have an overactive imagination like me, you may wonder: why is coffee called Joe?

As you may have already expected, there is no single answer to that question. As I break down the multiple explanations, I’ll let you decide which makes the most sense (or sounds the coolest).

Just A Cup Of Joe Please – An Association Of Averages

If you see coffee as the everyman’s drink, then the secret to its nickname isn’t that hard to guess. “The average Joe” is a common American reference to the everyday man, and coffee is one of the most common beverages, regardless of social class.

The association is simple: an average drink for the average man. Some nameless buster walks into your diner (yes, we’ve reverted back to the 1960s) and what does he order? He orders the same drink every other nameless buster at the bar is drinking: A cup of joe.

Younger generations today may be familiar with nicknames like mocha or java for coffee, even if they don’t regularly use them. These terms have been around for most of the 20th century, and back in the 1930s people would combine these into “jamoke” (1).

Whether its because they couldn’t get over their obvious obsession with renaming everything, or because they realized that “jamoke” was just ridiculous, some people may have shortened it to simply “Joe.”

Linguists who are fond of this argument point out that many slang terms constantly go through a process of shortening. Just look at the de-evolution of “what is up” and you get the picture.

The reason coffee is called your average male American name may just be a prolonged joke (2) originating from disgruntled WWI sailors. The story goes that a strict secretary of the American Navy, a man named Joseph Daniels, sought to limit all the debauchery going on in the Navy.

Though it was already difficult (since the abolition of the spirit ration aboard U.S. Naval vessels in 1862) to get your hands on alcohol while on a Navy ship or base, Mr. Joseph Daniels was committed to making it even harder. With a sudden lack of the good stuff, sailors quickly began drinking more and more coffee.

Since openly insulting your superior (in this case very superior) officer is a bit of a no-no in the Navy, sailors began calling their coffee “a cup of Joseph Daniels” in mock salute, which was shortened to “a cup of Joe.”

It’s a great story, but there are questions.

​“It is significant that an early example appears in 1931 in the Reserve Officer’s Manual by a man named Erdman: ‘Jamoke, Java, Joe. Coffee. Derived from the words Java and Mocha, where originally the best coffee came from.’” -Snopes.com, “Why Is Coffee Called ‘A Cup of Joe’?”

If you’re planning your own trip out to sea, check out my list of the best coffee travel kits.

Let’s face it: pop culture dominates many aspects of our daily lives, and marketers dominate pop culture. So when you ask how a cup of joe got its nickname, I might as well respond with, “How does anything in the US get its name? Marketing.”

The term “cup of Joe” was actually trademarked by Martinson Coffee, an American coffee company that’s been around since 1898. In its early days, people may have called Martinson’s coffee “Joe’s coffee” in reference to the owner, Joe Martinson.

Over time, this nickname may have expanded across the US as the company grew over the years.

As you can see, there are many names for coffee. The origin for some of these slang terms might be unknown, but we think they are still a great way to call our favorite beverage. Here are just a few we found:

The Verdict – Why Is Coffee Called A Cup Of Joe?

With so many different possibilities, you may still be wondering why some people ask for “just a cup of Joe”. At least now you have some fun stories to share with the Joes at the bar.

Just remember that calling it “a cup of joe” came from one (or more) of these places:

I know that I did not really answer your question about the definition of cup of joe. But does it matter? Let me know if you have any questions in the comments below!

The Dutch colonized the island of Java in the 17th century, and almost immediately began transplanting coffee trees to take advantage of the island’s climate and equatorial location. The Dutch trade empire was vast at the time, and as Europe began to develop a taste for coffee, “java” became a generic word for coffee. Here’s a more detailed article explaining why coffee is called java.

“Jamocha” means coffee, now usually combined with chocolate. The word originates from a combination of two famous coffee-growing regions, Java and Mocha, which were two of the most prevalent sources of coffee. Java (see previous question) is an Indonesian island on which the Dutch set up vast coffee plantations. Mocha is a port on the Red Sea, which was the source of some of the world’s finest coffee from the Arabian Peninsula. Together they formed the word “jamocha,” today most commonly associated with ice cream or other frozen confections based on coffee and chocolate. (If there’s a better flavor combination than chocolate and coffee, please let us know in the comments!) 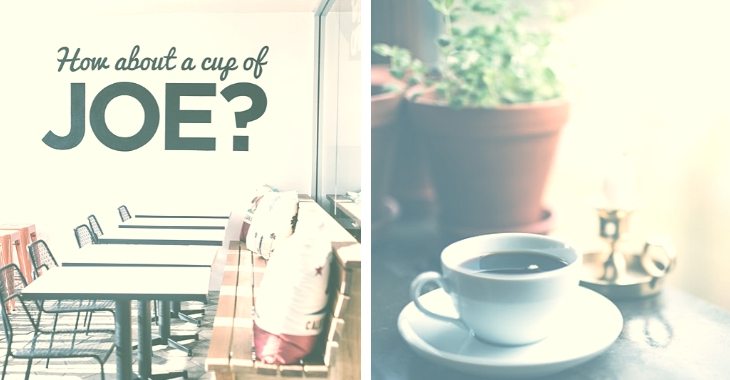 Jovana D
I come from a country where people drink domestic coffee (what the rest of the world knows as Turkish coffee) and where Nescafe designates all instant coffees ever made. So, imagine my first encounter with, say, Hario V60...Yes, it was love at first sight.  Today I’m a moderate coffee connoisseur and a huge coffee lover. My favorite brewing methods are the V60 and traditional espresso-making. Yet, despite my country’s long tradition of Turkish-coffee-adoring, I somehow cannot stand it. That’s just too dark, even for me.
JUMP TO:
Just A Cup Of Joe Please – An Association Of Averages
Simple Linguistics
Mocking the Boss
It’s Probably Just Marketing
What About Other Fun Slang Terms For Coffee?
The Verdict – Why Is Coffee Called A Cup Of Joe?
Frequently Asked Questions